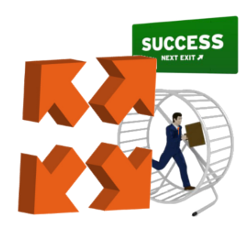 For humans to be portrayed as hamsters in a wheel is not considered as something positive. It suggests putting in effort without ever obtaining results. A waste of time. More importantly though, it points out people’s silliness for sticking to a habit and the inability to pause, reflect and redirect efforts. 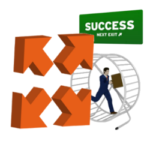 The Concept of Time

Unlike hamsters, humans are time conscious and their concept of time is influenced by many variables, including national culture. Regardless of culture, many people like to measure time in terms of change, such as an achievement. To achieve, people adopt habits to reach success quicker and more frequently.

For companies that aim at international expansion, some established habits can be helpful. However, consciously or unconsciously applying old habits in new markets can be catastrophic. The examples are numerous, but the example of Walmart ‘serving with a smile debacle’ in Germany, stands out.

The Wheel in Reverse

For companies that want to expand internationally, it is crucial to recognize habits and seek guidance to obtain new insights. Long term persistence may be required or success might be close already. Avoiding the hamster wheel altogether is better than getting out of it, because after a while in the wheel, one may be tempted to run back.